As with most fields, my primary field, international development, uses many standards and jargon that do not follow traditional rules of grammar, language, and spelling (and I’m a traditionalist). Some are harmless, such as capitalizing the “g” in “Government” when referring to a specific country (e.g., Government of South Sudan, Government of Nigeria); others are less so. I would like to share with you why you should stop one very common but very incorrect practice: calling an abbreviations list an “acronyms list.” 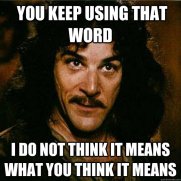 “Acronym” and “abbreviation” are not interchangeable terms. According to Oxford Dictionaries, an abbreviation is “a shortened form of a word or phrase,” while an acronym is “an abbreviation formed from the initial letters of other words and pronounced as a word.” Thus, acronyms are a type of abbreviation. Calling it an “acronyms list” is simply incorrect because the title “acronym” excludes many of the abbreviations we use, such as HIV, LOE, M&E, NGO, and U.S.

So, my major life goal as an editor—I’m not joking—is to rid the world of its incorrect use of
“acronyms list” in favor of the correct-on-all-levels “abbreviations list.” Or at the very least, “abbreviations and acronyms list.” I look forward to seeing this positive change in your documents. Happy writing!

Want to partner with Rachel? Have a question about available services or a blog post suggestion? Fill out the form on the Contact page or email utterediting@gmail.com.

Looking for specific “how to” information? Search through the Blog Categories.